Connecting to my very well hidden artistic side

As a part of the redesign I’m doing for my github site, I wanted to add a comic image of myself (inspired by @addyosmani and @davidwalshblog’s great avatars)

First, as always, lazy part of me tried some shortcuts.
I googled “cartoonize me”, and spent some time with the Simpsonize me without any good results.
After a while I found a rather cool site called befunky, which allows you to upload an image and do several sorts of effects on it, one being the cartoon effect, which I wanted.. 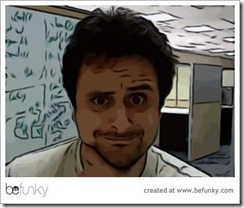 Although I was rather pleased with the result, it didn’t satisfy me.

Okies then, if you want something done right, do it yourself, right?

I fired up Adobe Illustrator, and hooked up the Genius Tablet I got for my talented Fiancée and gave it a try. 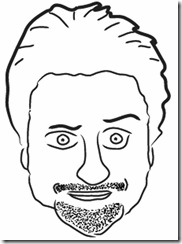 There should be a law forbidding people with graphic “talents” like me to even attempt to draw.

This is one of those “hmm.. it might be better to outsource this..” moments..